There’s a certain giddiness in the air right now with the arrival of Spring.

Tolstoy describes it as, “the time of plans and projects”.

The author Margaret Attwood goes a step further by saying, “in the spring, at the end of the day, you should smell like dirt”

In short, it’s a time of growth, emergence and fresh engagement with life.

I’ve been thinking recently about the idea of the Soul (the identity, the Self, “the spark of the Divine”, or however else you want to define it) and how this is linked to personal growth throughout the seasons.

The poet Rumi describes Spring as: “When ecstasy seems the natural way to be and any other out of tune with the season of Soul growth.”

This idea of careful building, strengthening and nurturing really speaks to me.

In the midst of life’s struggles and confusion the Soul is tough, savvy and self-sufficient and is built entirely out of attentiveness.

Spring is a time of building ourselves up after the winter months.

For me, food and family gatherings are an ideal way to go about this.

This is a recent snap from a birthday gathering in Scotland featuring the very best of comforting home cooked meals from various members of my extended family.

…and that’s only one half of the table.

Artichokes are a vegetable I’ve written about before on this blog.

I described growing seasons, preparation and the different types of artichokes available to us (of which I won’t go into right now).

Nutritionally artichokes have an excellent profile: they are good for bone health (containing phosphorous, manganese, and magnesium), pregnancy (containing folic acid – which protects against neural tube defects in babies) and they are especially good for for your heart (by lowering blood pressure/cholesterol levels.)

I also commented on their deep, earthy flavour, which is even more pronounced when paired with mushrooms.

1. Bring a large pan of water to the boil and cook the spring greens for 5 minutes hen turn off the heat.
2. Next, place a medium pan over a medium heat and add the olive oil. Throw in the artichokes, turn down the heat and cook gently for 10 minutes, stirring occasionally to prevent them sticking to the pan.
3. Add the mushrooms to the pan and toss to coat in the oil. Cook for 5-7 minutes then add the garlic and thyme. Cook for a further 30 seconds before adding the cubed apple. Serve warm with a grating of cheese on top and some crusty bread.

This is my creative take on using up spelt pancake batter mixture from “pancake day” or Shrove Tuesday as it’s more traditionally known.

1. Preheat the oven to 170 C. Mix the batter ingredients together and set aside in an oven dish.
2. For the vegetables, heat the oil in a medium pan over a high heat and fry the broccoli for 5 minutes, turning consistently.
3. Next, add the rest of the vegetables, tofu, garlic and seeds and cook for a further 2 minutes.
4. Combine the vegetables with the batter in the oven dish and bake
for 20 minutes.
5. Serve with a sprinkling of chopped mint leaves.

As an extension of my blog post about living in Plum Village, a Vietnamese Zen monastery in France, I thought it would be worthwhile attempting to cook my own home made spring rolls.

Turns out to be relatively easy – not at all what I expected. 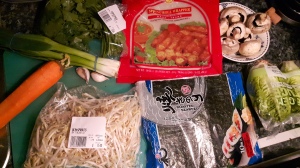 Vietnamese spring rolls differ from both Chinese and Indian versions – in that they’re not made using flaky pastry, nor are they deep fried or crispy, but are instead made with rice paper and are usually steamed.

For this reason they tend to be fresher, more delicate and lighter overall.

It’s not unusual to pack the rolls with crunchy shredded vegetables, meat, seafood, aromatic herbs and sweet black bean sauce (or soy sauce) – along with some spongy rice noodles for an added carbohydrate hit.

Another inspired addition to these rolls are roasted seaweed sheets – which are packed with protein and add a subtle texture to the overall dish. These sheets are layered over the rice paper before heaping the meat or vegetables on top.

You can buy both from Chinese supermarkets.

The recipe below is for vegetarian Vietnamese spring rolls. Bon Appetite!

I was reading recently that sales of Organic food and beverages in Europe and the US are on an upward trend going into 2016. This is great news.

As some of you may know Scotland has some of the best produce in the world – particularly, in my view, when it comes to the organic root vegetables – largely due to the quality of the soils.

With that in mind I’ve been thinking recently about East Coast Organics – the fresh veg box delivery service and farm from Pencaitland in East Lothian, Scotland. They provide us with a fortnightly delivery of the freshest and most delicious vegetables – nothing like the bland, treated stuff you’d buy in supermarkets.

In choosing a well-run service I was inspired by their business model, sourcing and commitment to ethics and sustainability. 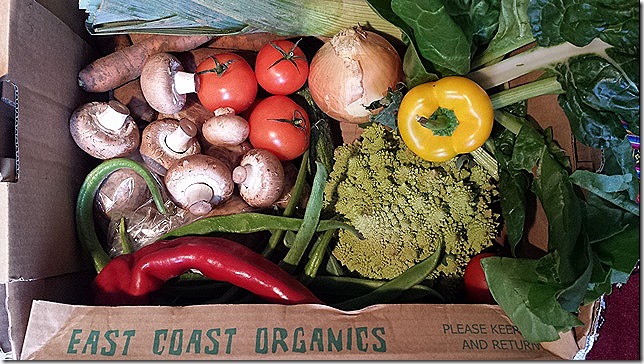 Their produce is grown in 10,000 square feet of polytunnels giving the company a wide potential for growing organic vegetables; such as carrots, beetroot, kale, mushrooms, spinach, leeks, garlic, onions and peppers – to name a few.

We always receive always a nice heap of wrinkly biomass with all sorts of earthly surprises – such as the occasional snail nestled in a head of broccoli – or salad leaves which are often “on-the-turn” before we’ve even opened the bag e.g. the lettuce can sometimes be quite mushy – but who cares: it’s only a lettuce!

The carrots and beets are often caked in soil – having been freshly pulled out of Mother earth. Supermarkets in the UK are restricted from selling “wonky carrots” to the consumer due to some harsh EU regulations on vegetables – with the vegetable box this rule simply does not apply. Also, I personally feel much healthier; there’s a certain vitality that comes with knowing that your vegetables haven’t been heavily treated with insecticides.

We do, however, reach a slight saturation point with the amount of potatoes in the veg box each week. I like a variety of carbs during the week and so, although I love roast tatties, it’s not going to fly night after night.

Overall, the service saves time on the ‘big food shop’ for the convenience of home delivery. It also helps to circumnavigate supermarket supply chains which often involve enormous air miles and spoilage.

On that note I’d like to invite you to sign up for a service with East Coast and check it out for yourself.