Towards the end of 2014 my fiancée and I decided to escape the bleak British winter and journey to Fort Cochin (Kochi), South India, to absorb the beauty, the sunshine and the rich foodie experiences of the state of Kerala.

I’m an enormous fan of Indian food. In fact, I would count it as my No.1 favourite of all world cuisines. 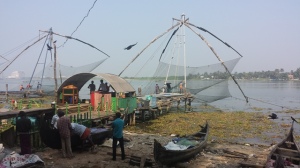 This trip gave us an opportunity to delve into the foodie culture of this old colonial port city whilst also getting a sense of the day to day lives of the people who live there.

Fort Cochin is an incredible place. The Lonely Planet describes it as:

“an intriguing mix of churches, giant fishing nets from China, a 400-year-old synagogue, ancient mosques, Portuguese houses and the crumbling remains of the British Raj.”

On our first day, after stocking up on a vegetarian breakfast from our hotel, we spent the morning sightseeing around the central districts, doing our best to negotiate the narrow lanes and busy thoroughfares, whilst motorbikes whizzed past in both directions blaring their horns.

Georgina with a piece of dried ginger

As well as their fishing industry, the city has a rich history of trading spices, dating back to the early 1500s, mainly focusing on pepper, cinnamon, cardamom, cloves and sandal wood. We were able to visit a wholesale emporium of spices featuring the most amazing display of ginger production, packaging and distribution, much of which was transported by truck to the rest of Kerala in enormous sacks.

The owners were very approachable and more than willing to talk to us about their spices.

Later on, we stopped off at a sugarcane vendor – with giant sugarcane stems being pressed through a machine to extract the liquid, before being decanted through a filter into a small cup. All for 30 rupees (about 31 pence in Pounds Sterling).

Just as coconut juice takes centre stage as the latest craze for hydration in many Western countries – sugarcane juice is the Indian sub-continent’s alternative treatment. It can be consumed fresh from the stalks or as a drink.

I took the first gulp, then passed it over to Georgina. The taste was akin to drinking brown sugar; with a dark, sticky, soothing texture.

In addition to being very tasty the health benefits of sugarcane are also much to be admired; which include low-cholesterol, high calcium, magnesium, potassium, iron and manganese. It also contains a low glycemic index (GI) – which controls how quickly blood sugar levels are raised directly after consumption. The reason sugarcane has low GI is because sugars derived naturally from plant sources are processed in your liver, not your small intestine, which means that the sugars from sugarcane — fructose and glucose — are more slowly absorbed than sucrose i.e. refined white sugar, thus ensuring a slow release of blood sugar throughout the day.

Dal Roti is an upscale North Indian restaurant with an affable owner, a wide menu and a very long queue of hungry customers. This comes as no surprise, which such an eclectic the menu offering everything from kati (or ‘Kathi’) rolls, stuffed paratta breads, tandoori fish, delicious thali meals and an enormous range of authentic curry dishes. 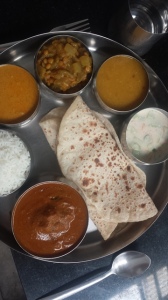 On one of our many visits, I ordered the Thali with chicken curry and chapati. Georgina ordered a vegetable-stuffed Kati roll – a flaky, buttery Indian wrap stuffed with spicy kababs (meat or vegetarian). Both we delicious. The flavour, texture and the immense serving size were absolutely on the mark.

Cost-wise, Dal Roti was very reasonably priced and shouldn’t break even the tightest of traveler’s budgets.

The service was great too. Despite the packed restaurant, there seemed to be only one waiter, who was nevertheless doing a cracking job.

I hope this has been an educational insight into this small sliver of South India. Please stay tuned and continue to check back for updates to the blog.